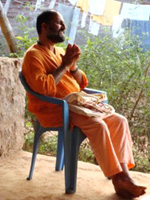 Swami Govindananda
SaraswatiWith 30 years experience teaching Yoga and Vedanta philosophy, graduating a few thousands of fledgling yoga teachers, Swami Govindananda Saraswathi is a gifted and charismatic teacher. Much loved by his students for his unique style and humour, Swami Govindananda is a rare jewel of integrity and truth, with hundreds of disciples throughout the world.

A direct disciple of Swami Vishnudevananda, Swami Govindananda started his ashram life in Sivananda Ashram Neyyar Dam, Kerala in 1987. Combined with his yoga teaching qualifications from the International Sivananda Yoga Vedanta Centre organization ( www.sivananda.org), Swami Govindananda has graduated in Physics and a Bachelors degree in Education, giving him a unique ability to dispense complicated philosophical teachings to be easily understood by people from all cultures, of all ages, all over the world. Swamiji spent 23 years teaching yoga in the Sivananda Yoga Vedanta Centres throughout the world.

Swamiji served Sivananda Yoga Vedanta organisation in its ashram in Neyyar dam, Kerala from 1987 to 1993. He was instrumental in establishing the Sivananda Yoga Vedanta Meenakshi Ashram in Madurai serving there from 2003 till 2010. During his association with the ISYVC organization Swamiji has travelled many times abroad visiting Canada, USA, UK, Germany, Austria and Bahamas. He left the Organisation in Apr 2010 to continue spreading the messages of his Gurus, Swami Sivananda and Swami Vishnudevananda, and established the ashram - Sivananda Yoga Vidya Peetham in South India.

Since its beginning in 2010, Sivananda Yoga Vidya Peetham (SYVP) is guided by Swami Govindananda spending his time there conducting the ashram activities. He also travels to different parts of the world , meeting spiritual aspirants to share his Gurus’ messages with many more people. If anybody is interested in having him speak, lecture or teach at his/her organisation, yoga school, university or school, please email him to make arrangements.
Swamiji can be contacted directly by email: govindanandaswami@gmail.com or by mobile # ( 91 ) – 8547879642
Personal blog URL : http://swamigovindananda.wordpress.com

Swami Tatwarupananda
SaraswatiSwami Tattvarupananada Saraswati was born & raised in Kerala’s culture capital, Trichur, India. As a spiritual seeker from an young age, he was fortunate to have met many different masters of repute. At the age of 18 he studied Sanskrit at the Narayana ashrama, Tapaovanam, in Trichur, which later facilitated his Vedantic studies. Keen to live his life as a Yogi, Swamiji set off for the Himalayas in search of a master & underwent rigorous spiritual practices in the company of many Himalayan spiritual masters.

Swamiji has devoted himself to the cause of under privileged children, founding the JJK Gurukulam orphanage in Trivandrum, Kerala, India. ( www.jjkgurukulam.org ) Here children of dysfunctional or under privileged families are provided with shelter, food & clothing and are given traditional & academic education, giving them the opportunity to grow into responsible human beings.

Swamiji is a master storyteller. He has a simple, humorous and direct way of teaching, which is much acclaimed all over the world. Nobody can miss the truth when it is unfolded traditionally and teachers from traditional lineages are rare.

Swamiji can be contacted directly by email: tattva1008@gmail.com 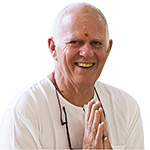 Robert Sankara MosesA direct disciple of Swami Vishnudevananda, Robert Sankara Moses has 45 years experience as a teacher of Yoga and Vedanta. Born in South Africa, Robert studied architecture, travelled abroad and met his guru, Sri Swami Vishnudevananda, in 1972. Robert spent the next 22 years with Swamiji, studying and serving in the International Sivananda Yoga Vedanta Centers (ISYVC). He directed ISYVC centers and ashrams and taught yoga teacher training and advanced training courses worldwide, including at the ISYVC ashram in Neyyar Dam, Kerala (from 1982 to 1994). In the early 1990s, Swamiji appointed Robert as one of seven original members of the newly formed executive board of ISYVC.

After Swami Vishnudevananda left his body in 1994, Robert left ISYVC to marry and raise a family. Robert continues to teach Yoga and Vedanta, and maintains his daily sadhana based on the teachings of H.H. Sri Swami Sivananda and Sri Swami Vishnudevananda. In 2003 he founded and continues to co-publish Namarupa: Categories of Indian Thought - a magazine about the philosophies and arts of India. Robert leads annual pilgrimages to sacred places of India. www.namarupa.org. He lives in New Hampshire, USA with his wife and three children. 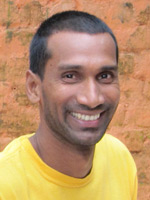 Mani RamanMani Raman is a dynamic, inspirational teacher of Yoga and meditation who brings his wisdom, high energy and humor to every class he teaches. Growing up in India, where he met and learned from many Yogis, saints and spiritual teachers, Mani developed a strong foundation deeply rooted in the Vedic tradition. He took to the practice of Yoga at the age of 12 and continued with Eastern philosophy and religious studies. After his wandering time in the Himalayas and a short stay at the Divine Life Society, Rishikesh in 1996, Mani devoted himself full-time to Yoga and joined the gurukula of the International Sivananda Yoga Vedanta Centres at the age of 21. For almost two decades, Mani studied and taught in the tradition of Swami Sivananda and Swami Vishnudevananda, guiding thousands of graduates in many international Teacher Training Courses at the Sivananda Yoga Vedanta Dhanwantari Ashram in Kerala/India, and travelling extensively worldwide for courses and workshops, mainly in North America and Asia.

For more than 12 years, he directed the Sivananda Yoga Vedanta Nataraja Centre in New Delhi, and was the director of the Centres in Tokyo/Japan and Bangkok/Thailand. He is a recognized senior teacher for the international Teacher Training Courses and Advanced Teacher Training Courses. Mani teaches Hatha Yoga (asanas, pranayama, kriyas, bandhas) and meditation, and gives inspiring discourses on Vedanta philosophy and the Bhagavad Gita. Holding a M.Sc. in Western Psychology, and having studied many systems of Eastern philosophy, meditation and Ayurveda, Mani responds to each student's individual condition with profound understanding and insight. Much loved by students from beginners to advanced, he teaches appropriately on any level from gentle to challenging. Mani's unique strength lies in fusing the traditional yogic teachings with practical examples from modern life to allow his students to access the ancient messages with ease and incorporate them into their daily lives.

On a regular basis, he conducts yoga and meditation courses, teacher training courses, workshops and retreats all over the world. More details : www.yogavana.in